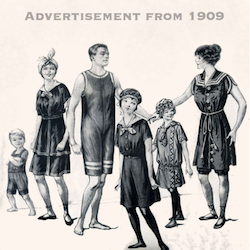 Answer: When I was asked this question, I did what I usually do and browsed through my books in search of an educated entry on the subject.

That search having failed, I turned to the all-wise internet and the top Google results tended toward two extremes: (1) Fundamentalist screeds and (2) Neo-evangelical mockery.

I did find one calm and reasonable article from an Australian Newspaper which is reprinted below. It does not answer the question directly, but I do think that Archbishop Kelly raises some reasonable concerns.

Perhaps more importantly, I was personally struck by how the interviewer and the Archbishop demonstrated such an admirable level of civility as they engaged in their discussion. Enjoy.

IS MIXED BATHING IMMODEST?
ARCHBISHOP KELLY THINKS IT IS
“OFFENSIVE IN GENERAL TO PROPRIETY”
THE BARRIER MINER (SAT, AUG 19TH, 1911)

“I think promiscuous surf bathing is offensive in general to propriety, and a particular feature of that offensiveness is the attraction it has for idle onlookers,” said Archbishop Kelly this morning (reports the ” Sun” of August 14), when approached by a “Sun’ representative on the subject of surf bathing, to which his Grace had referred in a recent sermon.

While thus expressing his objection to mixed surf bathing as at present practised along our beaches, his Grace was careful to make it plain that as far as surf bathing itself was concerned it had in him a strong advocate. “I regard it as an invigorating and healthy pastime,” he said, “so long as it is conducted with a proper respect for domestic modesty. What I strongly object to is the promiscuous commingling of the sexes, which is the chief feature of surf bathing as at present indulged in.”

“Would you suggest a reform in respect of surf bathing?”

“I think that the municipal authorities should take such steps in the regulation of surf bathing as would eliminate its present objectionable features,” replied his Grace. “There is no border line between vice and abuse of our good ones. And I believe that the promiscuous intermingling of sexes in surf bathing makes for the deterioration of our standard of morality.

“If we wish to have happy homes, our women must be respected. Every time they appear under immodest circumstances in public there is a diminution of that respect. It is what I would call subversive of domestic respect. For a woman to be exposed to public view as she is under the circumstances of surf bathing is utterly destructive of that modesty which is one of the pillars of our nationhood.

“I would that our municipal authorities had taken more mature counsel in this matter, so that arrangements could have been made for the sexes to bathe separately. If I might offer advice to our municipal fathers, I would urge that steps in that direction be taken without delay. As far as the dress is concerned, I have no objection to offer. But I would like to see a modification effected on the lines of assigning separate locations, not only for dressing, but also for the enjoyment of surf bathing. That would do away with the present abuse of a healthy and popular form of recreation and exercise.

“Surf bathing has come to stay,” pursued the Archbishop, “so that nothing in the shape of a prohibition would be thought of. But there is abundant room for improvement, and I see no reason why such improvement should not be made. In the eyes of strict modesty the present promiscuous method of surf bathing constitutes an offence in that it robs our sisters — who are our domestic treasures — of the respect that is justly duo to them.

“I have known of this promiscuous bathing at the Channel ports in the north of France, and there it has become decidedly demoralizing. Compare what one sees at these Channel ports of France with the decorum observed at the English seaside resorts on the opposite side! On the English side of the Channel the most circumspect person can go and bathe with modesty. Cross over to the French side, and a self-respecting, modest person could not fail to have his sense of the proprieties shocked by even looking, on. There are such immodest exhibitions to be seen in those places as furnish the demoralizing section of the French papers with improper cartoons. The conduct of the bathers at these places is such as to make it unfit for any self-respecting person to take part in the amusement.

“While appreciating the great benefits of surf-bathing, especially in a dry, hot climate such as ours, I feel it incumbent on me to offer a protest against the encroachment of these modern usages upon Christian modesty and reserve. The crowds of onlookers who go to watch the surf-bathers are not, it is to be feared, all actuated by worthy motives. I know of one incident which occurred “at Woolloomooloo, where curious onlookers were told by a policeman to go away. ‘If you want that kind of thing,’ he said, ‘you can go to Manly.’ That was certainly a keen satire on our present immodest system of surf-bathing.

“I am really more interested in the country than I am in Sydney,” continued his Grace. “There is one thing I would like to mention in that connection while I am on the subject. At some places along the coast, especially Kiama, the sacredness of the Church is not being respected by the authorities in setting apart localities for surf bathing. At Kiama, a place has been selected for surf-bathing which is in the immediate view of the church and school. This will be most objectionable.

“I would carefully guard against any infringement of personal liberty,” pursued the Archbishop, “and therefore I have no desire to be regarded as an opponent of surf bathing legitimately conducted. Indeed, I have often been pleased to see the bathers at Manly coming briskly along for their morning dip. It is the abuse of a popular and healthful amusement that I deprecate.

“There are certain things which are slippery,” concluded Dr. Kelly, “and if not guarded they will descend to the level of abuses, and result in public corruption. Unless the homes of the people are maintained on a modest basis, and unless people are attracted by real womanly modesty and not by the indelicacies of the so-called up-to-date woman, who moves about like a man and has no proper sense of decency, we are not going to build up a good nation.

“Woe betide Australia if she is going to encourage immodesty in her women.”