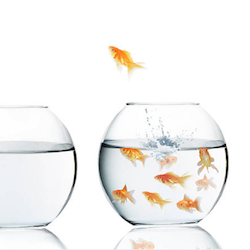 Though the principle of Free Enterprise is waning in our society due to Caesar’s increased controls over the marketplace, it still guides most consumer actions. There are brand names and products to suit most tastes and budgets. We shop around to get the best deal on the product we want. Buyers are not compelled to purchase a certain product; the committed Corn Flakes eater is free to give up his loyalty to Kelloggs and buy the generic cereal if he wishes. Late-night television viewers may choose between Letterman, Leno, and Limbaugh.

Similarly, many Christians bounce from church to church, shopping for the fellowship which best suits their tastes. If the current congregation fails to satisfy, there’s always another one across town with open doors, eager to accommodate a new customer. Changing churches is not much different than changing brands of cereal.

The freedom to choose products according to one’s tastes and preferences is healthy in a marketplace, but churches are not commodities in a marketplace. Congregation hopping militates against our Lord’s orderly design for His Church.

Christians are plainly commanded to be affiliated with a particular local congregation, coming under the oversight of a particular body of elders: “And we urge you, brethren, to recognize those who labor among you, and are over you in the Lord and admonish you . . . ” and, “obey those who rule over you, and be submissive” (1 Th. 5:12, Heb. 13:17).

In these verses we find a clear mandate for formal church membership of the sort that members are bound to heed the instruction and admonition of certain elders in a certain fellowship. The member is so bound that he is not free to escape or evade his identity with the particular local church.

Many Christians are content to wander from one congregation to the next, but in so doing they fall short of the Lord’s requirement for them to associate with a particular body. If elders are to watch over the souls in their flock (cf. Heb. 13:17), they must know precisely who is and who is not under their care. Peter instructs elders regarding the specific saints who have been entrusted to them (1 Pet. 5:3). This would make no sense if every elder in the world was immediately responsible for every Christian in the world. Peter’s instruction rather presumes that each body of elders oversees a particular body of saints.

This does not mean that Christians may not fellowship with believers from other congregations. In fact we are called to do so, and should seek out such opportunities. But in so doing we must not confuse the polity of the church. Each Christian is to be held accountable to a particular body of elders.

Though there can be legitimate reasons for leaving a particular church, many Christians leave a church for unbiblical reasons.

For example, matters of personal taste and cases of conscience (e.g., eating foods offered to idols) are no cause to leave a church. These include distaste for certain songs in worship, the manner or “style” of a pastor, the habits and occupations of fellow brethren, and convictions about minor points of doctrine. These sorts of concerns are common reasons why people leave to attend the church down the street. Leaving a church for these reasons violates a clear Scriptural principle: if the Lord receives such people and their practices, then so must you (cf. Rom. 14:1).

No church will be perfect. Understanding this, the saints are commanded to bear with one another and forgive one another (Col. 3:13). Walking out on one’s brothers and sisters in Christ is a pathetic way of bearing with them! If there are problems or weaknesses in a church, and there are bound to be, it is the discerning one who sees them that must stay there and do something about it! He must pray for, instruct and admonish his brothers as the situation warrants.

There are three scenarios which provide biblical cause for leaving a church.

1. It is permissible to leave a church if one obtains the blessing of the elders in doing so. In such cases the departure should be tearful and friendly. The most typical occasion for this is moving out of town. It is wise for the elders to withhold permission until they are assured that another able and upright body of elders is found to assume responsibility for those who are leaving. Another occasion might follow from acute doctrinal differences that cannot be resolved after serious and peaceful attempts to do so have failed, and the elders then grant permission for one to leave.

2. It is permissible to leave a church if remaining there would force one to sin. Examples of this include requiring a man to sit under a woman’s teaching (cf. 1 Tim. 2:12), requiring one to take an unbiblical oath (e.g., “I will not drink, dance, or go to movies (cf. Col. 2:18-23), or formally requiring one to affirm a doctrine that is contrary to his own convictions. Notice that mere disagreement with certain teachings and practices in the church is insufficient, particularly where leniency is allowed in those areas of disagreement. J. Gresham Machen’s connection with the Presbyterian Church (U.S.A.) was dissolved when the denomination’s General Assembly compelled him to tithe to missionaries who preached a false Gospel. Thus the dissolution was for biblical reasons, as was Martin Luther’s departure from the Roman Church.

3. It is permissible to leave a church that has become apostate. An apostate church is one that clearly promotes a message that is not the Gospel, or clearly permits open sin. It is churches like these whose lampstand has been removed (cf. Rev. 2:5); they are no longer true churches of Jesus Christ. Many sixteenth-century nonconformists justly left the Church of England for this reason.

The body of Christ is indeed a body, and thus its members must be committed to the welfare of the body as a whole. Leaving a church for unbiblical reasons violates this principle.

Written by Chris Schlect and used with permission from “Credenda/Agenda”