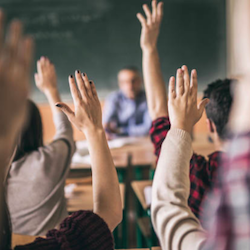 This word was used in pre-christian literature to describe a ‘pupil’ or ‘apprentice’ who had committed himself to attaining understanding or expertise in a certain field of study. Three things were assumed in ancient discipleship:

– A specific field of knowledge or skill

– A master or expert in that field

– A pupil who was dedicated to learn

Occurrences of the word ‘disciple’ in the New Testament are perfectly consistent with its ancient and secular usage.

At the beginning of his ministry, Jesus was announced as the ‘master’ or ‘expert’ in all matters pertaining to the Kingdom of Heaven, and all men were invited to leave their former callings and occupations to learn from him.

Once they did, these ‘disciples’ were to follow him wherever he went, listen to whatever he said, and become more like him by understanding and obeying his teachings.

While disciples in the ancient world did spend much time with their master (sometimes even living together), Jesus was careful to maintain the strict master/disciple relationship structure which had been established in antiquity. He said:

Here, the master/discipleship relationship and reward is clearly explained: If a disciple honors and obeys his master faithfully, he will someday become like his master.

In the secular context, a disciple would then presumably ‘graduate’ and become a master himself (eventually taking on pupils of his own).

However, and according to the New Testament, the disciples of Jesus never become masters themselves. It is always enough for them simply to have become more like their Master.